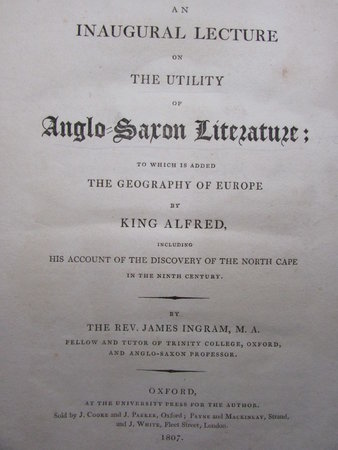 An Inaugural Lecture on the Utility of Anglo-Saxon Literature. To which is added the Geography of Europe by King Alfred, including his Account of the Discovery of the North Cape in the Ninth Century.

Oxford University Press, 1807. First edition. Original stiff card boards. Ex-library copy with label to front paste down and a couple of discrete library stamps. viii, 1-112 pp. With engraved map of two voyages to the Baltic. Some copies include an additional folding map, but Copac states that this is dated 1808 and suggests that this was in subsequent editions. 290 by 230mm (11½ by 9 inches). Copac ref. 19331769
"The geography of Europe; extracted from King Alfred's Anglo-Saxon version of Orosius" (p. [57]-90). "Notes on the first chapter of the first book of Ælfred's Anglo-Saxon version of Orosius. By Mr. J. R. Forster" (p. [91]-112)

Condition: The boards are a little darkened. Rubbing and chipping to the spine with a little loss. Binding holding well. Internally clean and tidy, Slight darkening to title page edges. No marks other than library stamps. Overall a very good example.