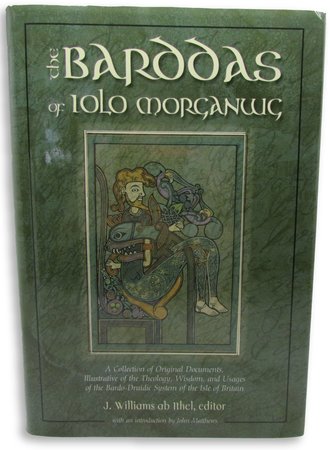 The Barddas of Iolo Morganwg: A Collection of Original Documents, Illustrative of the Theology Wisdom, and Usages of the Bardo-Druidic Systems of the Isle of Britain. Introduction by John Matthews

Boston M.A: Red Wheel / Weiser, 2004. On its publication in the 19th century, Barddas stirred controversy. Some critics claimed that it was completely made up, or based on forgeries. Others defended it by pointing out similarities to other surviving Celtic documents with clear provenance.
Photo-offset from the first printing, this edition of Barddas includes the original Welsh on verso pages with the English translation running on the recto pages. 425 pp.
In original dust jacket. 240 x 160mm (9½ x 6¼ inches John Matthews has been a practicing shaman for over 30 years and is a leading authority on Celtic traditions, Grail and Arthurian legends, and the tarot. He is the author of a number of successful divinatory systems based on early spiritual beliefs, and has acted as an adviser on several motion pictures, including Jerry Bruckheimer's King Arthur.

Condition: Both book and dust jacket are in fine / as new condition