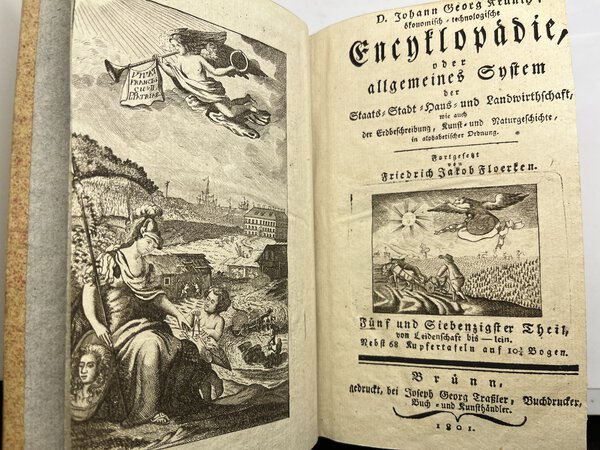 Brünn [Brno]: Joseph George Trassler, 1801. Volume 75 of this encyclopedia. Engraved frontis and 67 engraved plates to the rear, several folding. (So complete). This volume contains the entries from "Passion" to "Linen" and many of the plates have wonderful images of people expressing different moods in the style of Lavater. Hardback, in paper covered boards (age uncertain but likely mid 20th Century) Original label pasted to the spine. Clean and tidy. Internally clean and tidy throughout, a little creasing to the edges of the folding plates, but overall in excellent condition. Brünn, the second city of the Czech republic, was at this time, the capital of Moravia, and had a German speaking majority amongst its population. VIII, 800 pp + plates. Famous economic encyclopedia written by a total of six authors. The Berlin doctor Johann Georg Krünitz (1728-1796), who himself designed the first 73 volumes, gave the name to and initiated the ambitious undertaking. After his death, the work was continued first by the lawyer and composer Friedrich Jakob Floerke (1759-1799), and by his brother, the botanist Heinrich Gustav Floerke (1764-1835), volume 124-225 compiled by Johann Wilhelm David Korth (1783- 1861),