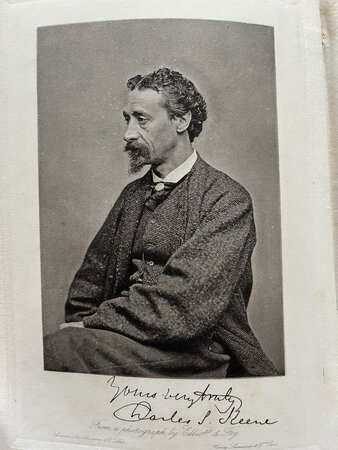 The Life and Letters of Charles Samuel Keene.

London: Sampson Low, Marston and Co, 1892. First edition. Hardback red cloth with gilt titles and decorations to front board and spine. Unusually, compared to other copies online, this one is appears to be signed in black ink on the frontis photograph by the book's subject (Charles Keene). Not by the author. The signature appears genuine under a loop. Ordinarily we would discount this as a printed signature (as he died in 1891) - but we have seen other copies where the frontis photograph has no signature to it, so wonder if there were some with a genuine inscription. Many b/w illustrations, some full page with tissue guards. Boards are slightly faded, slight lean and sun fading to spine, corners bumped. Inside there is some light foxing, but overall the book is good and scarce with Keene's signature. Two full page bookplates to the inside board and front end paper. Including one for Sir Frederick Lobnitz, shipbuilder and government minister (of munitions) during World War One. Ix, 463 pp.
240 x 160 mm (9½ x 6¼ inches).